What is the earliest time you can recall a woman depicted as either president or vice president of the United States? Perhaps it was in one of the more recent television series such as 24, Scandal, Madam President, or Veep. Maybe it was in 1997 when a female vice president played by Glenn Close descended by helicopter onto the lawn of the White House in a time of national crisis. If you have a really long memory, perhaps it is the 1964 comedy “Kisses for My President” which depicts the first female President of the United States or even 1924’s “The Last Man on Earth”, a silent, science fiction movie about how all men have died of disease and the country has a woman who serves as president. 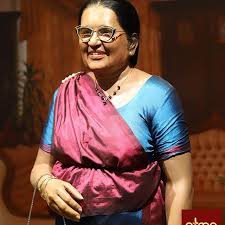 Sirimavo Bandaranaike, first female non-hereditary head of state in world history, became Prime Minister of Sri Lanka in 1960. How long before the United States has a female leader of their own? Photo Source: Picuki.com

Regardless of what you’ve seen in movies, television, books, etc., there has been to date no woman president or vice president of the United States although their have already been female leaders of many other countries including Great Britain, Iceland, Argentina, Brazil, South Korea, Taiwan, New Zealand, Liberia, India, Pakistan, Canada, Germany, and Finland among others. This isn’t to say that many haven’t tried. In 1872, Victoria Woodhull ran for president (with famed abolitionist Frederick Douglass as her running mate) despite nationally women not being able to vote in the United States. In 1964, Margaret Chase Smith, Republican Senator from Maine, became the first woman to have their name brought into contention for a major party nomination at a national convention. In 1972, New York Congresswoman Shirley Chisholm became the first woman to run for the Democratic Party nomination for president, as well as the first African American woman to do so, and the first woman to appear in a major party presidential debate. Also in 1972, Libertarian Vice Presidential nominee Tonie Nathan became the first woman to receive a vote in the Electoral College by a Republican elector who broke ranks with the overwhelmingly reelected President Richard Nixon. Then in 1984, New York Congresswoman Geraldine Ferraro became the first woman nominated for vice president when she was named the Democratic vice presidential nominee. 25 years later, in 2008, Alaska Governor Sarah Palin became the first woman nominated for Vice President on the Republican ticket after New York Senator and former First Lady Hillary Clinton came the closest woman ever to win a major party nomination. Most famously, Hillary Clinton would go on to become the first woman nominated for the presidency in 2016 and although winning the national popular vote by nearly three million votes, she was defeated in the Electoral College.

So no woman has broken the highest, hardest glass ceiling in American politics yet, but momentum is growing. In addition to Clinton’s historic status as the first female major party presidential nominee, a woman has run for the nomination of one of the two major parties in every election since 2008 (such as GOP contenders Minnesota Congresswoman Michelle Bachmann in 2012, businesswoman Carly Fiorina in 2016, and numerous women in the 2020 Democratic primary including members from both houses of Congress). Presumptive Democratic nominee former Vice President Joe Biden has said unequivocally that he will pick a woman as his running mate in 2020. Nikki Haley, formerly Governor of South Carolina and President Trump’s one time ambassador to the United Nations, has also been discussed as a potential prospect in 2024 (when New York Congresswoman and progressive rising star Alexandria Ocasio Cortez will also be constitutionally eligible to run) or even in 2020 should Trump or Pence ultimately decide not to serve again which suggests that there will come a time in the not so distant future where the United States will see a woman serve as Commander-in-Chief or Vice President.

Looking specifically at 2020, several woman have been discussed as potential running mates for Joe Biden including Senators Kamala Harris, Amy Klobuchar, and Catherine Masteo of California, Minnesota, and Nevada respectively among many others. While many other sites have debated who would be the best politically or the best person in the job, this post considers how users might use Social Studio to see who is winning the Twitter primary.

By doing a listening summary in Social Studio, you can search for the women from the CNN article hyperlinked above along with other terms such as “vice president” to see how many mentions there have been, and with deeper analysis in what contexts. The tools of Social Studio would also allow you to tease out some demographics about the users mentioning these contenders as well as what the sentiment of their post is.

Instead of doing this directly, the employees at the Adam Brown Social Media Command Center challenge you to do the search yourself and report your findings. It might be a few months before we know who will be the 2020 Democratic nominee for vice president but it will be interesting to see if Twitter provides foresight on who the eventual nominee will be. Try today and let us know your results!

The flagship campus of the University of Tennessee System and partner in the Tennessee Transfer Pathway.